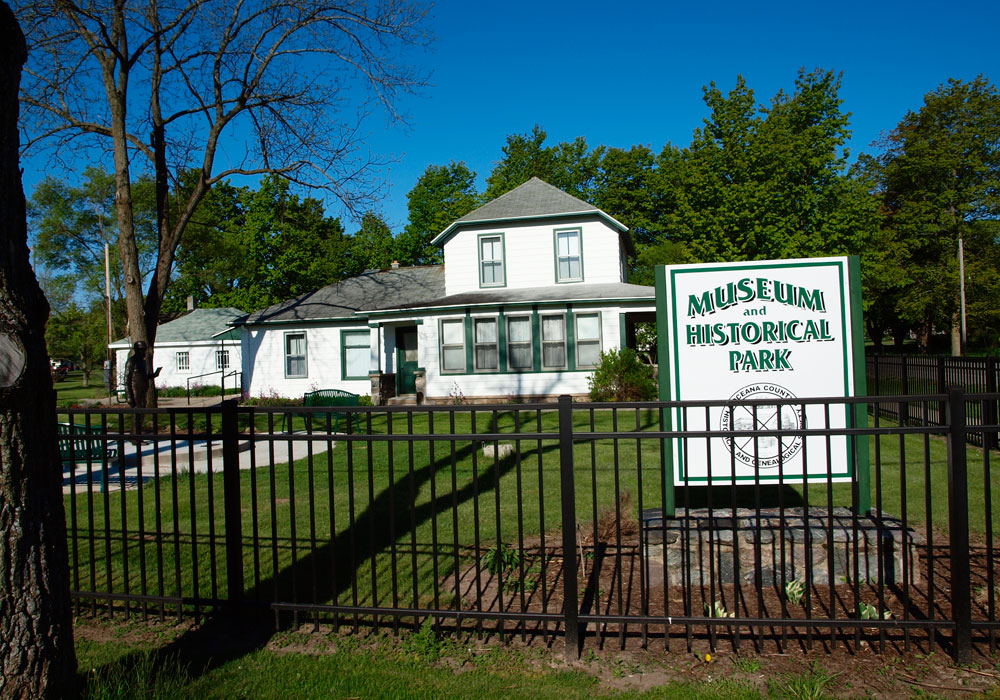 Built by Jesse Barton in 1893 as a 4 room, 2-story home and remodeled by the Lings about 1920 when the dining room, kitchen, bathroom, sunroom, one bedroom and front porch were added. No telephone was ever installed in this family home. If you wanted to contact the Lathers you either came to the door or wrote a letter. In 1935 Swift purchased the property which consisted of the home, garage and barn on 8 lots. The basement has a round brick Michigan cellar where canned goods, potatoes and apples were stored for the winter. A spiral staircase descends to the basement where an “octopus” furnace and coal bin still remain on a sand floor. ( The original bathroom facilities for the family’s use – a “three-holer” outhouse – are located in the garage. Since it was inside the garage, and the outhouse out of sight to the neighborhood, there was no need to worry about pranksters tipping it over on Halloween.)

Celia Lathers was known for her crocheting purchased by many people in the Mears area. Celia canned 500 plus jars of fruit and vegetables each summer to feed their family. Her chocolate cake and pies were family favorites. Celia cooked on a wood stove for many of those years. She had a quick wit and a great sense of humor. Celia passed away in 1965 at the age of 59. Swift’s room or (Pa’s room) was always in the northwest corner of the house and “off limits” to all but himself. Today, Swift’s desk, papers, printing press, addressing machine and other mementos are still there for visitors to enjoy. You can view two paintings by local artists of Dune Forest Village hanging on one wall and also read many newspaper articles written about Swift in his lifetime.

In 2008 it was decided to return the house to the “family home” the way it was when the Lathers family lived there from 1935 to 1970. The William Lathers Trust has

provided funds to purchase some of the period furniture. The pair of Lincoln rocking chairs, Celia’s crocheting, quilts and other items on display are on loan from the family.

Some Art and Craft features are the bookcase dividers in the living room, the beautifully carved glass doors, stenciled crown moldings and the dark woodwork are all original to the home.

Today, the remaining 4 lots which belonged to Swift have been acquired by the OCHGS and include the William Lathers Transportation Museum, the Robinson Exhibit building, the Boynton Cottage, The Swedish Church, the Garage Exhibit building and a new addition in 2011 will be Trapper Ralph’s one-room cabin. One of the most interesting characters ever to reside in the Greater Muskegon area was the newspaperman from rural Oceana County who sported the improbable name of Swift Lathers. Beginning in 1914, he published what he hailed as the smallest (and oddest) newspaper in the world. The weekly newspaper was only four pages long and measured just 51/2 by 71/2 inches. It was usually hand delivered to his customers throughout Oceana County, and a year’s subscription cost a mere 50 cents. The newspaper was known as The Mears Newz and it was usually filled with all sorts of brief descriptions of home life throughout the county. His paper had one catchall headline in which the first few words changed each week: “Woolen Under Shirts” or “New Resolutions” or “Hand sleds,” for example, “are ripe in the Land of Mears.” Despite the rustic nature of his approach to the news, Lathers was not afraid to editorially attack any issue or any person who did not measure up to his standards of morality, and this journalistic feistiness got him into numerous legal battles and earned him many enemies. Because of the uniqueness of his newspaper and his character, he had become nationally known by the 1930’s, and several prominent newspapers and magazines featured him in news articles at the time. One such article is reproduced here. It was written by James S. Pooler and first appeared under the title of
“America’s Smallest Newspaper,” in the American Mercury, 54 (March, 1942), pp 318-322.

MEARS, MICH. (pop 200), supports the nation’s smallest newspaper but supports it under protest. The protests range from simple name-calling to the favorite Mears sport of knocking Editor Swift Lathers from under his bowler hat. “There have been 27 such major assaults in the 28 years since Lathers founded his four-page Mears Newz in Western Michigan’s Oceana County. Nevertheless, no citizen dares miss a copy, and 1,810 people in 37 states pore over the 51/2 by 71/2 inch pages every week. The Mears Newz is celebrated in metropolis and hamlet, in drawing room and kitchen – wherever, in fact, that it appears. “The reason for this popularity, incredible to the uninitiated, is Swift Lathers himself. Swift is the spirit of Richard Gordon Bennet at a whistle stop, a pre-Winchell snoop, a poet in prose, a curator of humanity, a zookeeper of mankind and the most assaulted editor in the history of vigorous journalism. “He describes himself as the ‘Defender of Civilization at the Crossroads,’ ‘A Fireball Rolling Down the Pages of Oceana County’s History’ and ‘The Perambulating Conscience and Gardener of the Dune Country.’ The most articulate of his enemies calls him ‘a peeping Tom who thinks he is Thoreau.’ “Swift Lathers is 52 now, and his eyes blink badly, but he misses very little of the life around him, and he is spry enough to scramble about Oceana County 15 miles a day on foot to get the news. He uses the rural doings of Mears, Hart, Pentwater and Shelby (a cluster of little towns in the thinly-settled county) as a sounding board for his own views, which are pertinent enough to get his one-man newspaper rated among the six best weeklies in the county. ” The headlines in The Mears Newz reflect Swift’s concern for civilization, if one agrees with the editor’s definition of all civilization as ‘just Mears on a more elaborate scale.’ “SOMETHING ALWAYS is ‘ripe in the land of Mears.’ It may be that ‘Roman Candle Remnants Are Ripe in the Land of Mears,’ or perhaps ‘Wishbones and Feathers’ are ripe, or ‘Hearts and Paper Lace,”Mittens and Snow Images,”Beach Umbrellas,’ ‘Inaudible Frogs’ or ‘Soapy Windows.’ Whatever the season has to offer, it is ripe in Mears. “Under the headlines, Swift carries on his perennial battle. His earthy touch has dealt with politicians, schoolteachers and small town morals; petty grafting, closed roads, billboards and the U.S. Post Office; sand scooters, dog snatchers and censorship; the great state of Michigan and a short weight butcher. “Swift Lathers’ life is …simple…but the practical business of making a living comes hard. He must get $2.40 a day out of Oceana County, a feat roughly comparable to floating a German War Loan in Coventry. The Mears Newz requires $4 a week for operation, and the remaining $12.80 goes to operate his family: a wife and six little shavers, whose names-Thelma Celine, William Rush, Forest Glen, Nathan Quick, Sylvan Dale and Fleet Birch-reflect their fathers’ imaginative love of nature. “Yet Swift has done will by his own definition. He began with 300 subscribers and no reputation at all, setting his type in an old cider mill. In 28 years, he has acquired a subscription list that would be many time longer if he did not purposely limit it, a 40-year-old typewriter with a six-row keyboard to help his composition, and a reputation both local and national. He changed his paper’s name from News to Newz because a reporter told him the former wasn’t distinguished enough. Aside from all this, Swift and the Newz haven’t altered. “No one knows how big a subscription list he might have compiled, because one day, when the circulation hit 2,740, Swift made himself immortal among editors by voluntarily cutting the list in half-literally-with a pair of scissors employed at both ends. Everybody whose name began with a letter up to D or after S stopped getting The Mears Newz. “That left Swift free to do complete justice to Oceana County and to homestead a sand dune. He always wanted to go as far west in michigan as he could and settle a sand pile he could call his own. ‘No politician in Oceana County sleeps well on the eve of election Swift is given to getting out 3,000 extras on such nights and……..